Apple at its launch event just announced the most durable Apple Watch ever made, designed for extreme athletes, the watch is designed to perform optimally even in the most adverse conditions.

“An essential watch for just about everything,” as Apple called it on its live stream. The Apple Watch Ultra has both design and features twice as powerful as the Apple Watch Series 8. The $799 Apple Watch is designed to perform very well in three of the athlete’s most extreme situations, including the ocean, an extreme marathon track. and mountain climb.

Let’s first discuss the features and then dive into the details of how the Apple Watch Ultra can protect the extreme athlete in any situation.

The Apple Watch Series 8 isn’t inferior when it comes to features and functions, but the Apple Watch Ultra takes it to the next level. Built to withstand the harshest environments, the watch features an aircraft-grade titanium case and a sapphire front glass.

To make them more capable in a variety of extreme environments, Apple has equipped the Ultra Watch with the largest and brightest screen, side buttons available, a second speaker, 3 microphones, cellular connectivity, night mode, and even pathfinding. 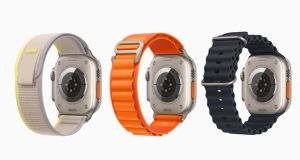 Apple, being a tech genius, understands that the Apple Watch Ultra will be more than just a watch, but a tool for athletes going into dangerous places unknown. With this in mind, the company has developed 3 different straps for 3 different extreme sports; Climbing, swimming and marathons. Let’s discuss in detail each sport and the features offered to help athletes.

While almost every extreme sport can sometimes prove fatal, mountain climbing is considered the deadliest of all. Most of the deaths are due to limited performance and judgment on the part of the climber.

Apple Watch Ultra helps climbers stay focused by measuring heart rate, vertical oscillation, and other health metrics. It also provides the climber with accurate GPS and alerts important organs in the event of an incident, increasing the likelihood of saving the climber’s life.

The Alpine strap comes with a titanium G ring that ensures the watch stays in your hand even during the toughest climbs.

Running a marathon is considered a challenge that few are capable of, we’re not talking about small 10k marathons here, but extreme marathons that run through deserts, rainforests and some of the most dangerous places in the world.

During a marathon, the Apple Watch Ultra will help users get the most out of their trial run and provide them with important metrics such as heart rate, swing, and more. It can also provide a foot-to-foot transition for the runner, allowing them to better measure their speed. running.

The loop strap on your Apple Watch keeps you snug and comfortable even on your longest runs.

The Apple Watch Ultra has a special focus on swimmers, and we say that because the tech giant has included a new swim app called “Oceanin+” on the Ultra watch. This application was created in collaboration with Oceanic, a company that develops computers for swimming. Designed to provide the ultimate in swimmer assistance, the app provides swimmers with the smartest metrics such as swim depth, visibility, currents, and even safety alerts. To make it easier to use, the swimmer can control the app with a simple button press and rotation.

For its ocean group, the tech giant has kept things very simple yet interesting. The ocean strap is more like a chain that fits snugly into the buckle so no amount of water pressure can pry your Apple Watch Ultra out of your hands.

Read more: Why should you replace your old Apple Airpods with the latest Apple Airpods Pro 2? Key takeaways from the 7 September event

Domestic and international tourist crowds traveling in Japan
4 hours ago