Richman 10 is a classic Asian monopoly game where players can win through luck (rolling dice) and strategy (buying real estate and drawing functional cards). The unique 3D style also includes cute Asian style cartoons. Three game modes are offered: story, multiplayer and online PVP, as well as other card features that speed up the pace of the game. The story mode is suitable for both young and old players, with a touching story about friendship and justice.

All players start with a certain amount of cash and feature cards. Each player takes turns rolling the die to determine their character’s next turn. New property can be bought on free squares, and rent must be paid if one lands on another player’s property. In addition to the real estate grid, there are other squares (e.g. bank, store, fortune teller, prison, hospital) that offer interesting gameplay options. Wise use of functional cards also improves strategy against other players.

Have fun playing Richman 10 with friends and family! As a friendly reminder, if you’re not ready to lose your friends over a board game, then you’re not playing hard enough! 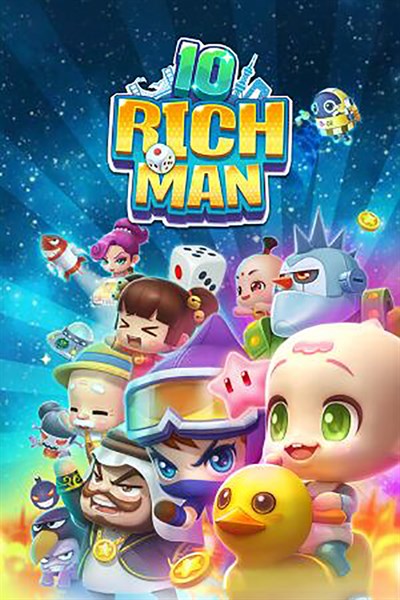 Richman 10 is now available on the Xbox and Windows Store! Xbox Play Anywhere supported! Gameplay The game uses a turn-based system, initially all players have certain deposits, cash, cards. The number of steps to be completed is determined by a die roll. Landless property can be bought when the enemy’s property is trampled on, and a duty will be paid when the enemy’s property is trampled on. In addition to the real estate grid, the map also has banks, news, shops, a magic house and other event grids that make the game full of variables and entertainment. Wise use of the cards in hand can actively interfere with chance, improve strategy, maximize self-interest, and lay a good foundation for ultimate victory. New Pattern In addition to the traditional Richman game, “Richman10” adds the latest hot fighting game. The map has canceled a small real estate grid, most of the map grid is to get the map grid, players through a large number of collecting and using cards, inflicting monetary damage to the enemy, bankruptcy, and ultimately victory. Organize a team New team formation mode, there can be random team formation, teammates can cover each other’s property, and can also strategize to set one of the enemies on fire to make the game pace faster. Mechanism innovation. Richman cards of all ages must be collected in cards and purchased from stores. To win, players need to balance money and points. “Richman10” cards are bought directly with money and the scoring system is abolished. Compared to past dynasties, it has a faster rhythm and does not need to go through the previous depressive stage. At the beginning the game is more interesting. Checkpoint In story and biography mode, the barriers are moderately difficult, suitable for young and old alike, and the plot is full of interesting things, focusing on positive energy stories of friendship and justice.