capcom Street Fighter He has had many rivals over the years, including the likes of Virtua Fighter, Mortal Kombat and Guilty gear. However, one franchise stands out as a true competitor: SNK’s king of fighters. Since its inception in 1994, the series has offered what many fans see as the only legitimate alternative to Capcom’s one-on-one game, and was at one point more popular than Street Fighter in Japanese arcades. After a barren period for the franchise (and arguably the genre as a whole), King of Fighters is experiencing a renaissance of sorts, which makes publishing Bitmap Books’ King of Fighters: The Complete Story all the more timely.

It is over 540 pages long and contains interviews, illustrations, screenshots and more. The King of Fighters: The Ultimate Story follows in the footsteps of Metal Slug: The Ultimate History and Neo-Geo: A Visual History; all of these books are the result of the publisher’s close relationship with SNK, a relationship that has allowed unparalleled access to the company’s vaults and to its past and present staff.

The book covers the full history of the series, beginning with its origins in fatal fury a franchise that was itself seen as a spiritual successor to the original 1987 game. Street Fighter (creators Takashi Nishiyama and Hiroshi Matsumoto will leave Capcom in favor of SNK after its release) – up until the very last entry, King of Fighters XV. The origins of the game that started life as a side-scrolling fighting game called Survivors, is also detailed, and the developers are filling in gaps in the timeline that were previously left blank. Bitmap Books is proud to announce that for the first time the entire story of King of Fighters is told in its entirety, a fact that is hard to dispute. 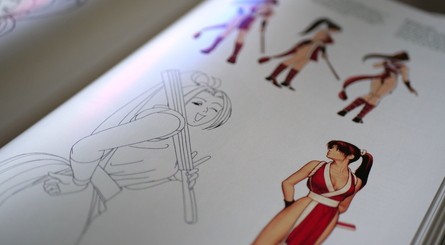 We’re also getting pages and pages of great on-screen art from the game, as well as a plethora of carefully drawn concepts and character illustrations, including several fighter art that never made it into any of the games. There is also a generous helping of full color illustrations, most of which were used to promote each title or decorate covers and operating instructions for local ports. The classic work of legendary illustrator Toshiaki “Shinkiro” Mori has become a feature throughout the series and still looks absolutely stunning. This is where Bitmap’s usually brilliant production values ​​come into play again; paper of unsurpassed quality, which allows art Indeed shine.

Perhaps the book’s most exciting element for seasoned fans is the section at the end, which features a Q&A with some of the key staff members who have worked on the franchise since 1994. Hosted by none other than former video game journalist and occasional Nintendo Life member James Mielke (along with his wife Joy), these interviews feature Masanori Kuwasashi (planner KOF ’94 to ’96), Toyohisa Tanabe (lead planner, KOF ’94–96), Shinichi Shimizu (lead programmer, KOF ’94–96), Masaki Kukino (producer, KOF XII to XIII), Hideki Asanaka (musician on KOF ’95 to XV) and Eisuke Oguru (artist, KOF 2000 to XV), and are a real treasure trove of new ideas and information.

Bitmap Books continues to set the bar when it comes to this sort of thing; this is a coffee table book, no doubt about it, but unlike many gaming publications that clog bookstore shelves, it’s not busy repeating the same information and illustrations. The King Of Fighters: The Ultimate History is designed to provide an experience that both newcomers and veterans of the series will appreciate, and is an essential read for anyone who considers himself a fighting game fanatic.