Along with the rather depressing – perhaps even controversial, depending on your opinion – news of the Wii U and 3DS eShop closing next year, Nintendo also shared a rather neat trip into the past. Similar to the Year-End Switch website many of us have used, you can visit memories of My Nintendo 3DS and Wii USign in to your Nintendo Account and view your lifetime 3DS and Wii U usage statistics.

There are some caveats to the data (3DS data only includes up to February 2020, for example), but it’s a nice little trip down nostalgia lane nonetheless.

We created our “Memories” and share the resulting infographic below for your enjoyment, even if some of us disagree with the “data”! 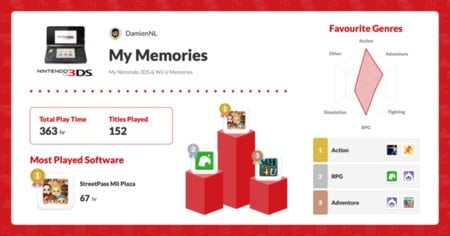 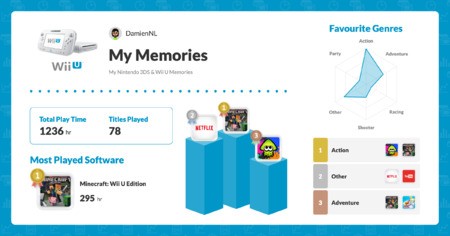 As you can see, StreetPass has been a BIG part of my 3DS life and one of the main reasons I always carried the console with me. Animal Crossing was also a favorite, as were most 3DS owners. I tried to hack Monster Hunter on the 3DS – mostly because Tom said how amazing it was – but as you can see, I may not have gone as far as I should have.

As for the Wii U, I have to admit that my stats are skewed by the fact that my son was constantly playing Minecraft and Splatoon on it. 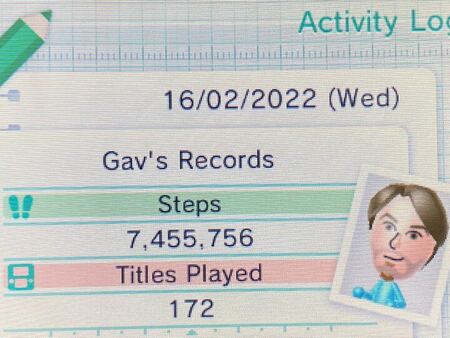 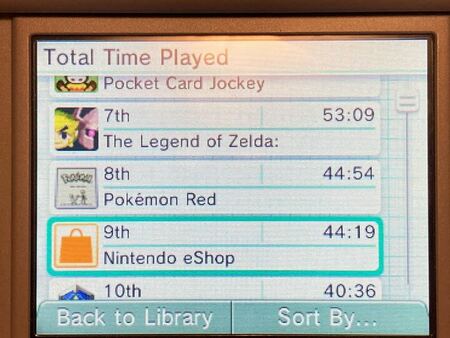 Unfortunately, my Nintendo Network ID and Nintendo Account are in different regions and I can’t link them to get Wii U and 3DS stats in a spectacular infographic format. However, I can run my trusty 3DS (New, XL, Super NES edition, he speaks smugly) and check my activity log for some cold hard stats. I could do the same for the Wii U (white version, 8GB), but that would mean it would have to be taken off the top of the wardrobe.

At the time of writing, I have apparently played 172 games on my 3DS and logged 7,455,756 steps – ha, they don’t include that in their trendy infographics, do they?! Number 1 – Animal Crossing: New Leaf, 239.42 hours played. Square StreetPass Mii ranks second with 207.39 hours (so many meet and greets under this arc!), and Fire Emblem: Awakening also takes the podium with 106.38 hours.

Most surprisingly (or not), I spent over 44 hours browsing the webshop for purchases, making it the 9th most “played” software on the console. Maybe it’s a sign that I need to rethink my choices in my financial life, but I prefer to see this as a fitting tribute to the amazing 3DS online store and how much it will be missed when it disappears. 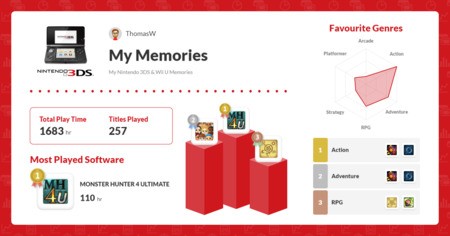 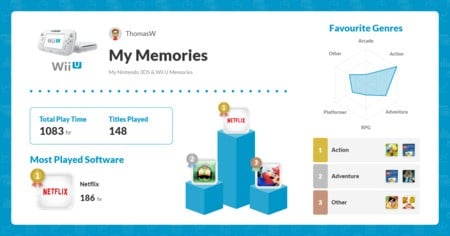 Oh how I loved Monster Hunter 4 Ultimate on the 3DS; I have fond memories of darting about with the Insect Glaive and making mounted attacks at every opportunity. To be honest, this is how I still play Monster Hunter Rise. Fire Emblem Fates is there because it had 3(!) campaigns and to be honest I didn’t reach credits in all of them. Most revealing, however, is the presence of StreetPass, a feature that I feel is sorely lacking on the Switch. Streetpass was brilliant for community and social elements, even if you’re just meeting Mii characters and not real people.

I have some great memories with StreetPass, but my favorite was walking past a former NL member who is also one of my favorite people. He lives in the USA, but we passed in person in Edinburgh, Scotland without realizing it when he was on holiday. Our mutual amazement on this occasion was something special.

As for the Wii U, the funny thing is that I don’t remember using Netflix that much; what’s even funnier, we still don’t have Netflix on Switch! Of course, there is Monster Hunter 3 Ultimate (the last MH game on Nintendo hardware that amusingly supports voice chat), as is the excellent Mario Kart 8. I loved the Wii U and enjoyed playing many of the smaller games from the eShop, but even with relatively by high numbers, they are still well below the 3DS—the Wii U just didn’t resonate with the gaming public, and its impact unfortunately suffered as a result. 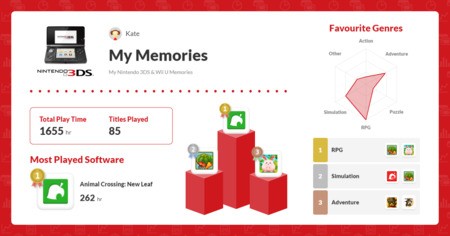 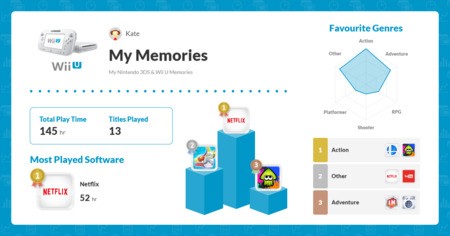 The 3DS may still be my favorite console, so I’m not surprised to see so many watches! I used to play it during the hour-long bus ride to work, as well as almost every night before bed – and I live in London, so StreetPass has always been popular. It’s also not surprising that my three most popular games are Animal Crossing and Story of Seasons because these types of games reward daily play and distribute their content very, very slowly. I don’t think this necessarily reflects which games I enjoyed the most on the 3DS – Ace Attorney doesn’t even show! — but I’m glad to see Fantasy Life holding up there. What a gem.

I’m a little ashamed of my Wii U numbers, but to be honest, when I was at ONM (the official magazine of Nintendo), we mostly reviewed games on a shared, office Wii U… and who knows where it is now. 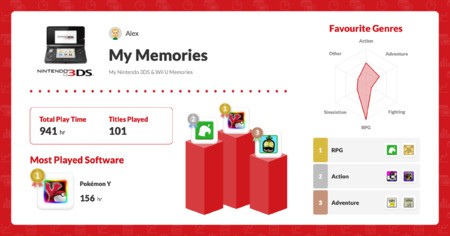 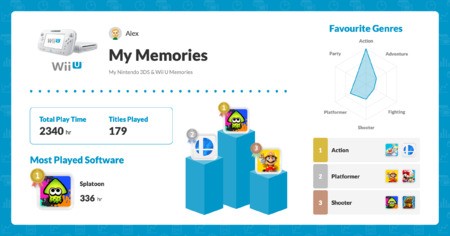 The biggest surprise was that the numbers on the Wii U far exceed those of the 3DS, but Splatoon alone basically confirms that this is probably accurate. Smash doesn’t spoil anything, of course, either, but a standout nice surprise for my Wii U times is the inclusion of the SteamWorld Heist icon in the bottom right corner. Can’t beat it.

At first, I was amazed that Pokémon Y came out on top for the 3DS given that my memories of the game are minimal at best, but it probably comes down to the fact that my partner played it on my account before. how she got her own 3DS. Animal Crossing: New Leaf is not surprising, except for the fact that it is classified as an RPG. Monster Hunter 3 Ultimate? I think most of those hours were spent trying to understand the tutorial and I never managed to beat Deviljho. 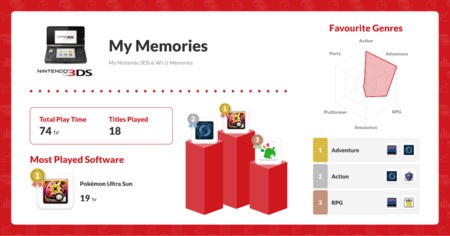 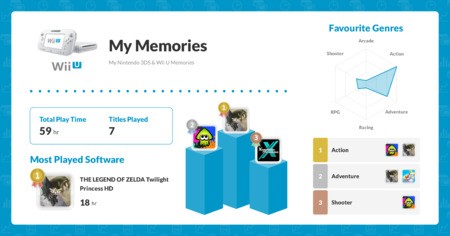 So, a little disclaimer about my memories… None of the screenshots are a complete representation of my time with the 3DS and Wii U because I used multiple consoles and accounts! I used to sell things to buy new things, then sell new things to buy back the old ones… It was a whole thing.

In any case, I’m pretty sure that while Twilight Princess HD ranks at the top of my Wii U play time, I’ve actually played Metroid Prime Trilogy for a lot longer, just on a separate profile. Similarly, I played a ton of Fantasy Life on the 3DS, but you wouldn’t have guessed by looking at the screenshot! I’m actually quite surprised that I spent so much time with Pokémon Ultra Sun, actually – I didn’t really enjoy it… 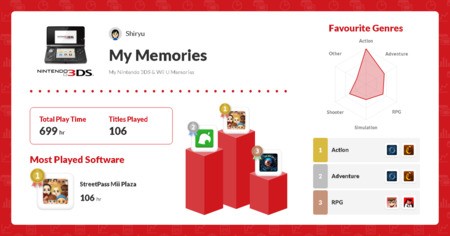 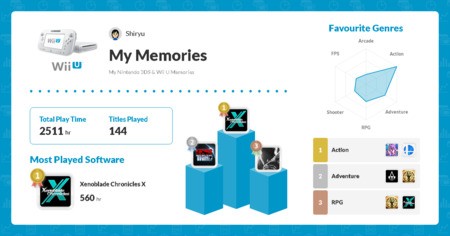 Looking at these images, I return to a very happy period of my life. The 3DS remains by far the best portable console I’ve ever owned, with more game time than the PSP and Vita. This image doesn’t really show the full picture because 3DS remains home to several of my all-time favorite franchises that are stubbornly missing from Switch: Super Street Fighter IV 3D Edition, Dead or Alive Dimensions, Tekken 3D Prime Edition, Ridge. Racer 3D and, most importantly, Ace Combat: Assault Horizon Legacy+ are all present and count on the 3DS.

Far more shocking might be the three games I spent the most hours playing on the Wii U. Xenoblade Chronicles X was always going to be the obvious number one because I didn’t just beat the game, I lived in it for three months. Now Devil’s Third and Call of Duty: Black Ops II may seem a little strange to you, but the reason is the same: reliable, fun online modes. The Wii U was my very first HD console, so there are several missing games in this screenshot. It made me a fan of Mass Effect, Assassin’s Creed, Darksiders and many other games that I’ve never come across before. The number of hours on both Tekken Tag Tournament 2: Wii U Edition and Tank! is also unknown. Tank! Tank! 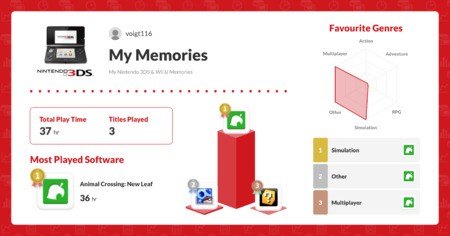 I remember thinking it would be great to watch Netflix on my TV and then grab the GamePad and watch the same show anywhere in the house! Within 25 feet. Seriously, the Wii U can be considered a failure, but it was everything I liked about Nintendo – something unique, strange and unusual.

Was the 3DS my most popular console, even though the numbers somehow disappeared from my account? (I’ve had three different systems, so it’s probably something to do with). I remember the first time I saw stereoscopic 3D without glasses, it blew my teenage mind. It was literally technological magic, and to this day, nothing else hits as hard. I also know I spent hundreds of dollars on themes for this thing – where are our Switch, Nintendo themes?! And I still remember sneaking this thing to work at my very first adult job, and somehow StreetPassing with the professional adults in my office building – who also played Pokémon and Animal Crossing? I really love the Switch, but it still has a lot to learn from the 3DS.

These are our official memories, don’t forget to share yours in the comments!