Harness the power of the Norse gods and earn your well-deserved place in Valhalla!

Kingdom of two crowns, the latest installment in the Kingdom franchise, is known to many of you as a terrific pixel art strategy game. The essence of Kingdom games is easy-to-learn and, at first glance, minimalistic kingdom management. You can recruit new and forever loyal citizens, assign them professions, build buildings, and then gradually expand your kingdom – all with the simplest controls imaginable.

This approach is one of the heart of the Kingdom franchise. But Kingdom of two crowns significantly different from its predecessors, because this time you can play together with a second player. Since the game is played on a 2D stage, the kingdom expands in two directions accordingly. As such, the partner is of great help in defending these two fronts from the mysterious enemy.

Inspired by rich Scandinavian culture and mythology, massive premium expansion Scandinavian lands for Kingdom of two crowns not only adds a completely new setting to the main game, but also new hazards, units, puzzles, and more! For example, the Berserker is one of the powerful new units that can be used against the ghostly Greed as you ride Fenrir’s back through your ever-expanding kingdom and unleash the powers of the Norse gods!

But beware, Greed also has new powers in its ranks, and the powers of the Norse gods are not easy to tame and use. Mysterious statues are scattered across the islands, waiting for clever monarchs to discover their secrets – only then can players earn the favor of the gods. You are ready? V Scandinavian lands waiting for you! 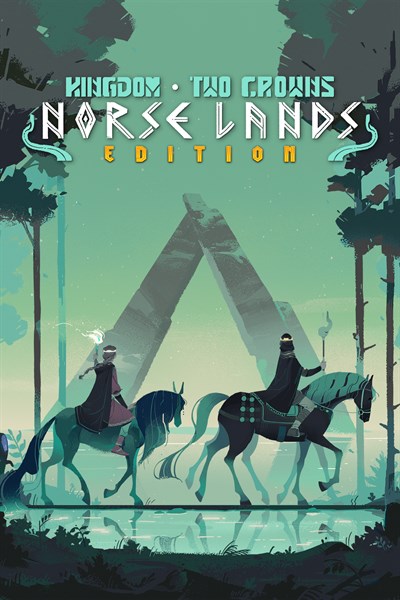 Kingdom Two Crowns offers a minimalist side-scrolling micro strategy, wrapped in a beautiful modern pixel art aesthetic. You are an ambitious monarch on a faithful horse, recruiting loyal subjects to build and protect your kingdom from creatures of the night, seeking to destroy everything and take the crown! Now your journey expands North with a completely new campaign setting inspired by Viking culture. Kingdom Two Crowns: Norse Lands Edition includes Kingdom Two Crowns and the all-new DLC Norse Lands. Now take your crown and use the powers of the Scandinavian gods, command powerful units, craft Viking-inspired weapons, solve puzzles, battle the new Greed, and much more …